Hurricane Ike sent Dave's family to the safely of Dallas.
Cousins are reportedly having a great time together.
Adults are hanging in there... No power in Lake Jackson, so this could go on for awhile.
Jeff took the kids to see his work. That's why it looks like they are in a hospital.
No need to think the worst. 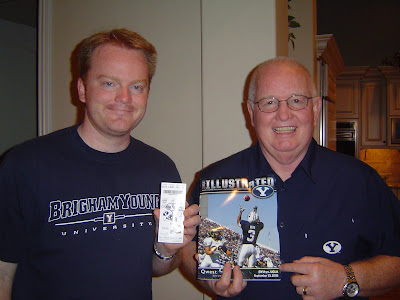 In the meantime, Sam flew in to watch BYU play UCLA.
They were pretty happy about the score.
As for me, I cooked more ribs.
at September 13, 2008 4 comments:

Ben and I attended a 135 stake regional conference broadcast this morning. The talks were great, but unfortunately, unlike general conference, they won't be on the internet later so we can absorb a little more. President Uchtdorf was the concluding speaker. He mentioned that as an airline pilot, when he flew jets from Europe to Los Angeles, he flew directly over Provo. When acting as the captain, he had complete control of the public address system, and he always pointed out BYU.

He suggested we re-light our fire of conversion by contemplating two things:
1) How can we increase our faith in Jesus Christ?
2) How can we strengthen families?

We also listened to Elder Jensen, President Packer (if I don't have a favorite child, I shouldn't have a favorite apostle, right?), and Sister Gibb, who is President Monson's daughter. Good stuff, all of it. While we enjoy "normal church," I feel like the next few weeks will be, "back to your regularly scheduled programing."
at September 07, 2008 1 comment: