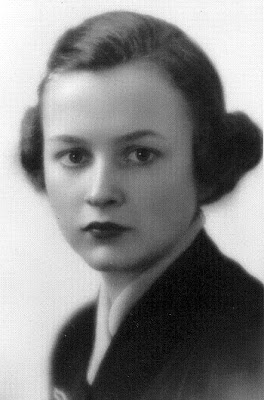 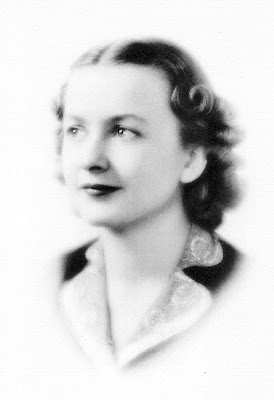 She was known as Maydae -- she was 7 before she knew
her name was Ida Mae. 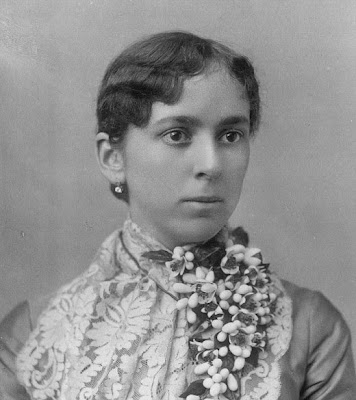 Maydae was the granddaughter of pioneers.
Her grandmother Mary Ann Elizabeth Driver
was brought across the ocean by her parents
and celebrated her 1st birthday on the plains. 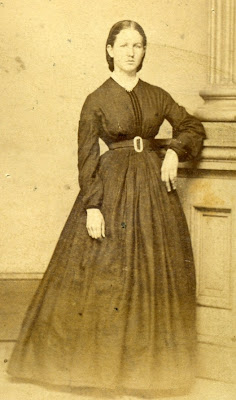 Her other grandmother was Martha Telle,
who came to Utah when the train line was complete
and married the apostle George Q. Cannon.
Maydae was born in Martha's home. 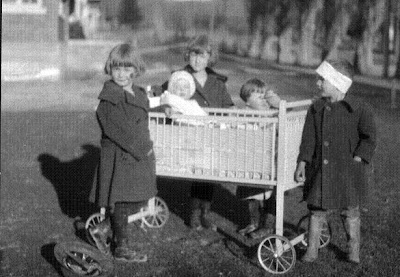 Maydae was born during WWI.
L-R: Betsy, baby Joan, Ida Mae, Janet,
and on the right -- Collins, my father,
always pretending to be coming home from the war. 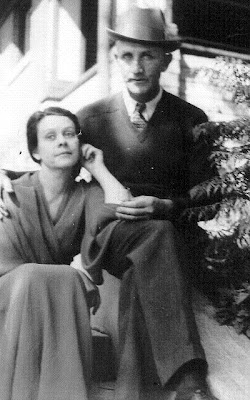 Their parents were Ida May Burton
and Collins Telle Cannon.
For the first time, today I noticed a
resemblance between Nana and Corinne. 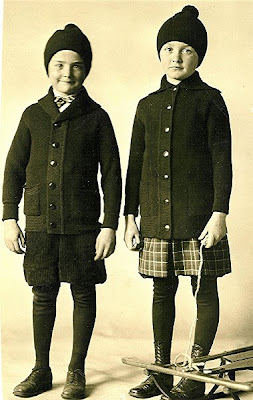 Daddy Cannon owned a woolen mill in Logan
before the Depression.
Dad and Maydae were often models for the sweaters. 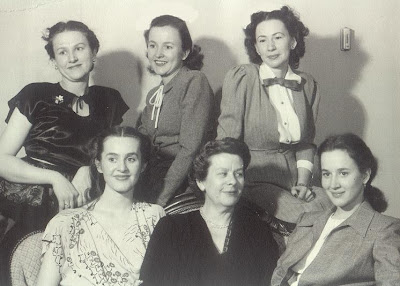 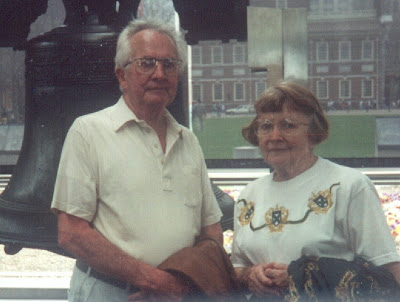 In the mid-90s, Dad took Maydae to Turkey with him.
They stayed with me in NJ on their way out of the country.
I took them to Philadelphia before they left.
Upon returning from Turkey, Maydae told me she'd had a great time,
except that no one believed she was Dad's sister.
They thought she was his mistress.
To say she was not pleased would be an understatement. 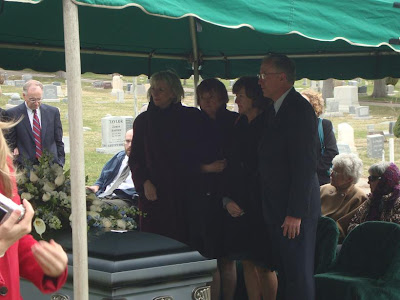 Maydae's four children honored her wishes,
and made it possible for her to die at home. 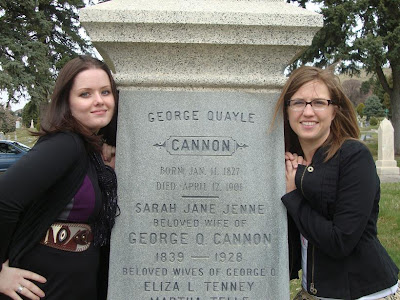 Corinne and Hayley pose with their illustrious great-great-grandfather. Corinne got in touch with her grandparents. 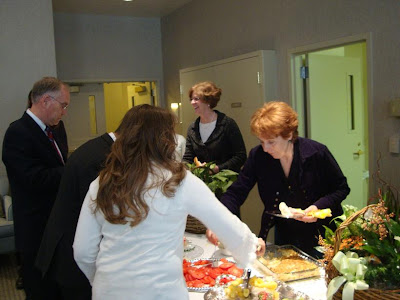 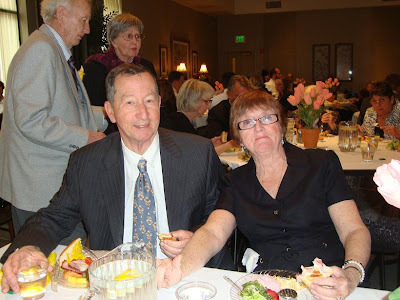 Reid and Joan, and Frank and Rosanne enjoyed the luncheon. 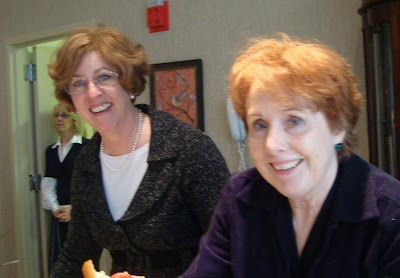 Annette and Susan caught up. 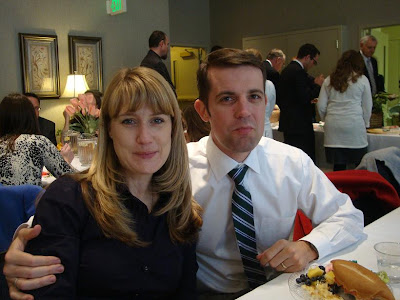 Rachel and Jonas confirmed the meal was wonderful. 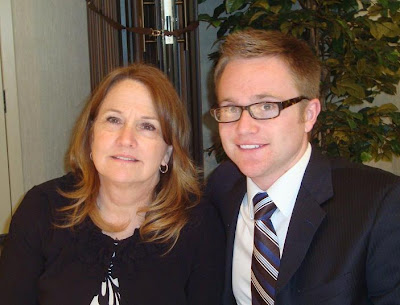 Mary and Chris were happy to be there. 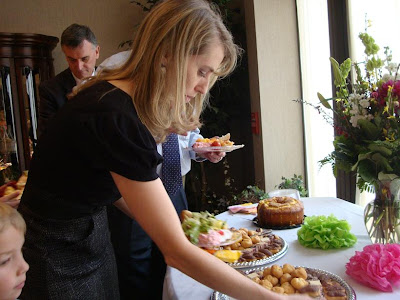 Maren sampled the dessert table.
She and Trent played a beautiful cello/organ duet during the funeral. 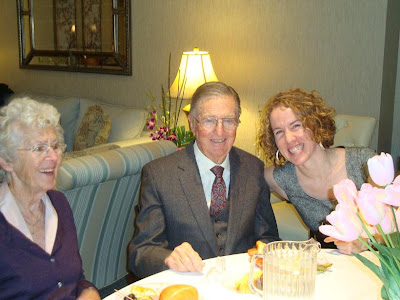 Betsy loved being with her grandparents, Janet and Pete. 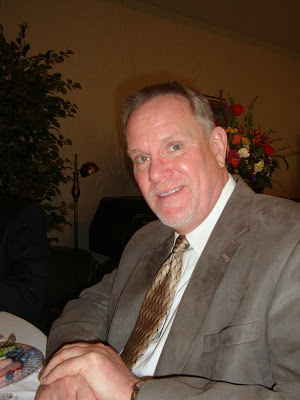 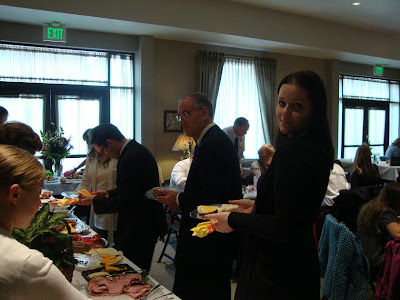 I was personally happy that Corinne could attend. 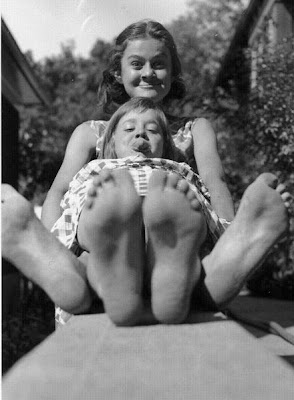 The last two surviving siblings of Maydae
are Janet and Joan.
at March 26, 2011 2 comments: 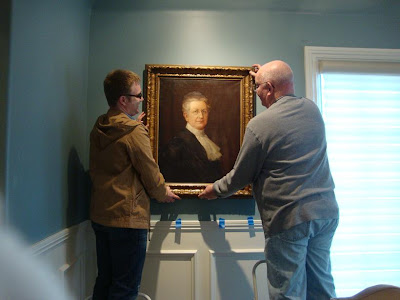 I have loved this portrait of my great-grandmother,
Martha Telle Cannon, since I was a little child.
This painting used to hang in my grandmother's home.
Never did I dream that someday it would hang in my house. 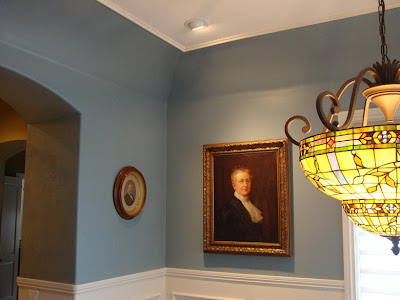 I inherited the portrait of George Q. Cannon,
Martha's husband, 7 years ago.
Now they are together again!
at March 25, 2011 3 comments: