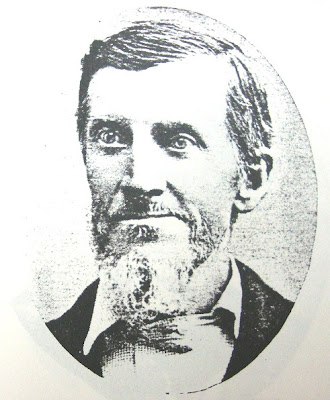 I am researching the family of my ancestor James Radford Millard.
He was born in Biddisham, England, in 1827.

I knew he was the youngest of 14 children, but while I found his parents,
I could not find him.
Yesterday I found him on this 1841 census, living with
the Parsons family at age 14 where he was apprenticed to be a shoemaker.
I know he was happy here. How do I know this?
In 1902 James Millard saw that the temple work was done for this family.
It melted my heart when I put all the pieces together.

While looking for someone else, I found James on the next census in 1851,
working on a farm.
In 1853 he left England, never to return. He crossed the ocean and plains alone,
but in 1854 he married a newly arrived immigrant and convert from Wales.
He and his wife had 5 children.
He worked as a shoemaker in Farmington, but he was also a farmer.
His wife died in 1872, but he served a States mission in 1876,
leaving his children home together taking care of his farm.
In his old age he served as a Patriarch.
He also did a lot of temple work, which I am carefully going through now.
Each day I am grateful for the faithfulness of my ancestors.
at August 10, 2011 1 comment: